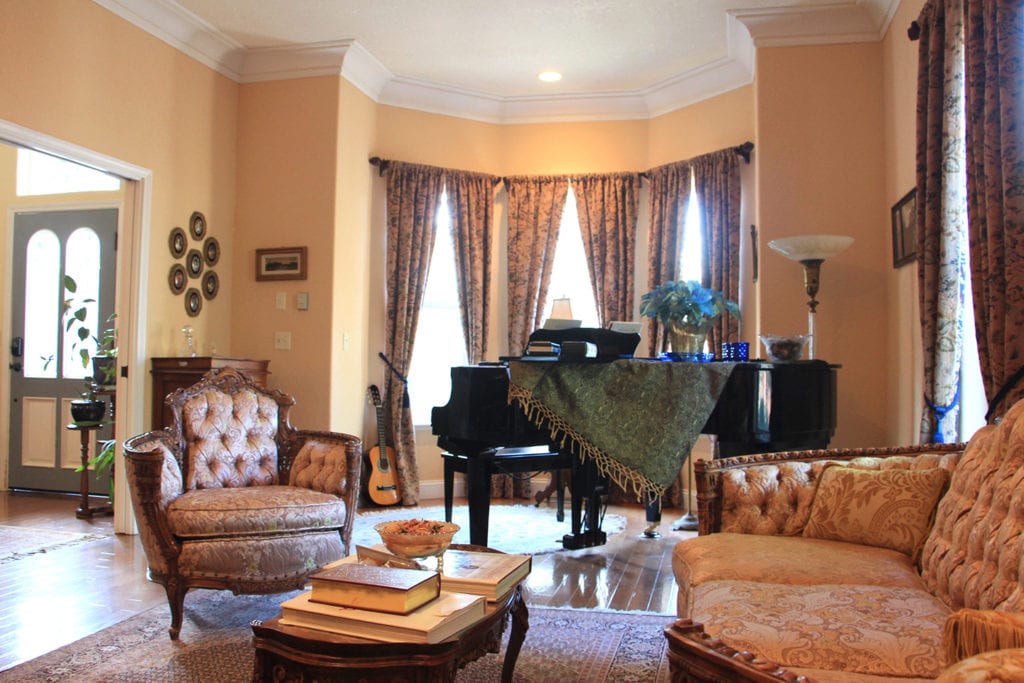 Refined Elegance in a Remote Country Setting Near Yosemite

Just 20 minutes from Yosemite National Park’s Big Flat entrance, but miles from the highway and the nearest town (Groveland), the remote and elegant Yosemite Rose Bed & Breakfast is a rare find.  The stately inn is nestled on 210 quiet acres bordering Stanislaus National Forest and Yosemite National Park.  A replica of a late 1800s Italianate Revival mansion, the inn is surrounded by grand oaks, towering pines, fresh water ponds, and miles of hiking trails, including a one that climbs down into the Tuolumne River canyon.  In winter, the grounds are blanketed in snow and then transformed into a profusion of blooms in the spring.  All year round, the dark night skies are ideal for watching meteors streak across a blaze of stars.

Donald and Katherine DaValle have owned the property for over 30 years.  In the early years, they camped on the land with their six children.  When the DaValles retired in 1997, they planted over 2,000 olive trees with the intention of pressing olive oil, but they lost a battle with gophers and lost all of the trees.  On vacation that year in Kauai, they were in a bookstore when they stumbled across a book titled So — You Want to be an Innkeeper: The Definitive Guide to Operating a Successful Bed and Breakfast.  The DaValles had initially opposed the idea of turning their family’s property into a bed and breakfast, but the book changed their minds.

Katherine acquired copies of the building plans for a historic mansion she had long admired: the Henry Rengstroff House in the Bay Area.  Now a museum, the Rengstorff House is one of Mountain View’s oldest homes. It was built in 1867 by Henry Rengstorff, a prominent businessman who operated a ferry between San Francisco and Mountain View.

The DeValles began construction on their replica of the Italianate mansion in 1999 and took three years to build. The symmetrical design features two large bay windows on either side of the front portico, a hip roof, and a central gable crowned by a widow’s walk.  Inside, the mansion features beautiful woodwork, high ceilings, pocket doors, imported antique paintings, and classic period décor.  A grand piano sits in the bay window of one of the parlors, while another parlor is filled with hundreds of antique hardcovers of classic novels.  A handsome blue felt billiard table sits in what had been the men’s smoking parlor at the original Rengstorff House. The inn’s gracious dining room features a hand-painted mural of Yosemite Valley and out back, the veranda is an idyllic spot for savoring breakfast in the summer months.

At stay at the inn includes a full breakfast each morning served with seasonal fruit and assorted juices, coffees, and teas. Breakfast favorites include the mascarpone-filled crepes with house-cured ham and sourdough French toast with blueberry compote and chicken apple sausage.  In the evenings, the inn serves scrumptious desserts with brandy and port.  Tea service is available throughout the day.