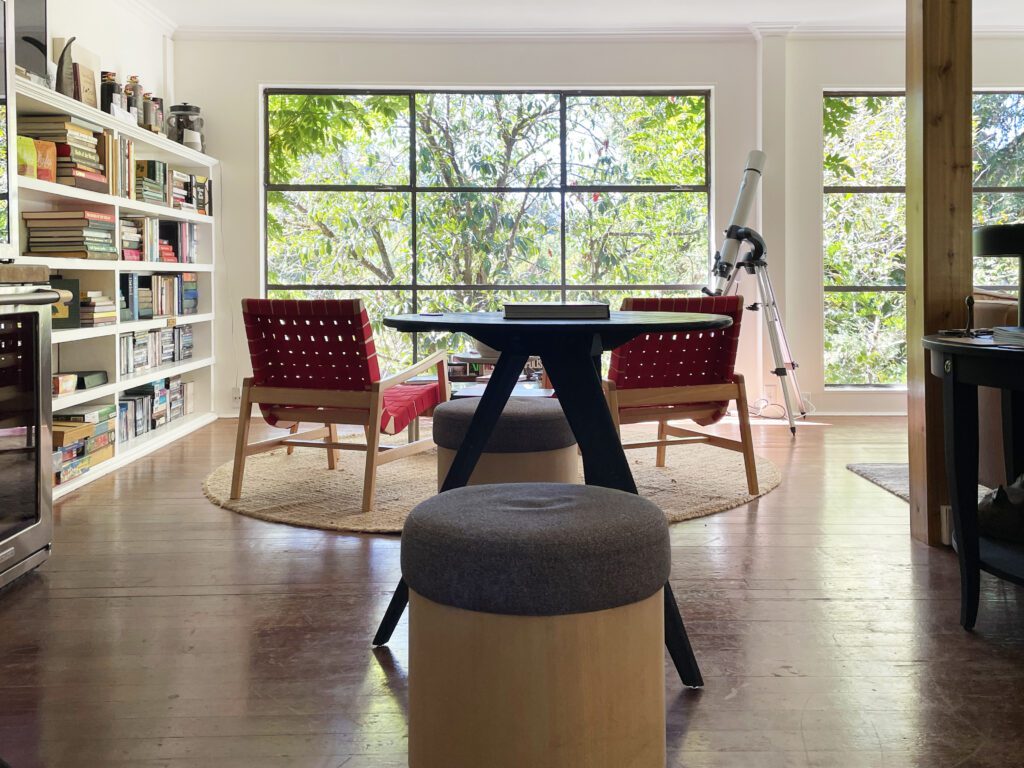 Mine + Farm: A Modern, Thoughtfully-Designed Spin on a Bed and Breakfast Inn

On a trip to Sonoma’s Russian River Valley, my husband and I arrived at Mine + Farm, where we let ourselves in with a keyless door code and immediately felt as if we had entered the home of some very hip friends. The music playing over the speakers had a chill urban vibe. The forest views framed in the bank of windows made the living room feel like a lofty tree house. The collection of books and magazines, modern furnishings, and vintage farmhouse accents all exuded erudite tastes with an inviting, laid-back quality.

We wouldn’t actually meet the owners of the inn until the next day (they were out for the evening), but they had texted us with self-check-in instructions and notes about the well-curated honor bar featuring local wines and beer.

We found our room on the second floor of the farmhouse and made ourselves at home. We poured some wine, perused the stacks, and sat back in the Risom lounge chairs to read and watch the late afternoon sun filter through the trees. Later, we played a game of ping pong and then walked down to the river to catch the sunset.

The inn’s main house was built in 1906 by Louis E. Ridenhour. He and his family had migrated from Missouri in the mid-1800s and homesteaded 944 acres on both sides of the Russian River. The Ridenhour family farmed the land, growing mostly hops. Together with the McPeak, Guerne, and Korbel families, they shaped the development of western Sonoma County. In fact, the Korbel homestead next door would later become the site of the winery and vineyards for Korbel California Champagne.

In the 1970s, the original Ridenhour farmhouse was converted into a bed and breakfast: the Ridenhour Ranch House Inn. It changed hands a few times over the years before Suzanne Szostak and Bryce Skolfield purchased the inn and its two-and-a-half-acre farm in October 2019.

Leaving careers in marketing/technology and public policy/social justice, Suzanne and Bryce were searching for something different. They wanted to run a business together that would allow them to cultivate new strengths.

They both had passions for design and travel. Bryce had been running a small design studio as a side hustle, creating functional, everyday items in San Francisco’s Mission District. In their travels, they had felt most at ease and connected with the world when immersed in new places and meeting new people.

Hospitality hadn’t necessarily been at the forefront of their search, but when they found the inn, they both recognized its potential and the ability to merge passions. In purchasing the inn, they could expand Bryce’s workshop and cultivate a modern approach to the bed and breakfast experience: one that weaves thoughtful design and sustainability with friendly, non-intrusive hospitality.

The journey, however, has not been without its share of complications. Suzanne and Bryce’s plans for a full renovation of the old farmhouse were derailed first by the pandemic—which brought travel to a standstill just months after they purchased the inn—and then by the Walbridge Fire in August of 2020, which came within just a few miles of the property. The renovations have taken longer, and the scope is continuing to evolve, but their vision for the property is coming into sharper focus.

Suzanne and Bryce have added 92 solar arrays which produce nearly 100% of the electricity required for the inn. They’ve created inviting outdoor spaces with the addition of a hot tub, fire pit, bocce ball court, horseshoe pit, and a very cool ping pong table. They’re working to restore the landscape’s native plants and have planted a garden. Their flock of hens produces the farm-fresh eggs for the inn’s delicious breakfasts. (The housemade juice blends and yogurt parfaits with housemade granola are amazing.) They are also growing cannabis to share with guests in the form of pre-rolls on the porch.

Inside, they’ve transformed the rooms into clean, modern spaces with nods to farmhouse style and mid-century modern design. Before we arrived, they had just finished renovating the bathroom in the Forestville room where we stayed. The bath now features a beautiful shower with a frameless, barn-style sliding glass door, a rainfall showerhead, and a hidden drain.

All nine guest rooms feature premium quality cotton linens and bath towels, organic bath products in refillable dispensers, and flashlights for exploring after dark. Pets are welcomed in the three carriage house rooms. Guests can help themselves to complimentary coffee and tea and filtered sparkling water from the fancy dispenser in the kitchen. The kitchen also houses Mine + Farm’s marketplace, which offers unique gifts made on-site in Bryce’s studio as well as the handiwork of local artisans.

My husband and I found Mine + Farm to be an idyllic home base for exploring the Russian River Valley as we biked Guerneville’s country roads, hiked at Armstrong Redwoods State Natural Reserve, and paddled the river. One evening, we took glasses and a bottle of wine out to the back of the property bordering Korbel’s vineyards to enjoy the sunset and then cuddled up with books on the couch to read late into the night. In the mornings, we enjoyed coffee by the fire pit while chatting with other couples. Mine + Farm’s well-curated collections, thoughtful design choices, and relaxed, low-key vibe offer a refreshingly modern spin on the traditional bed and breakfast experience.