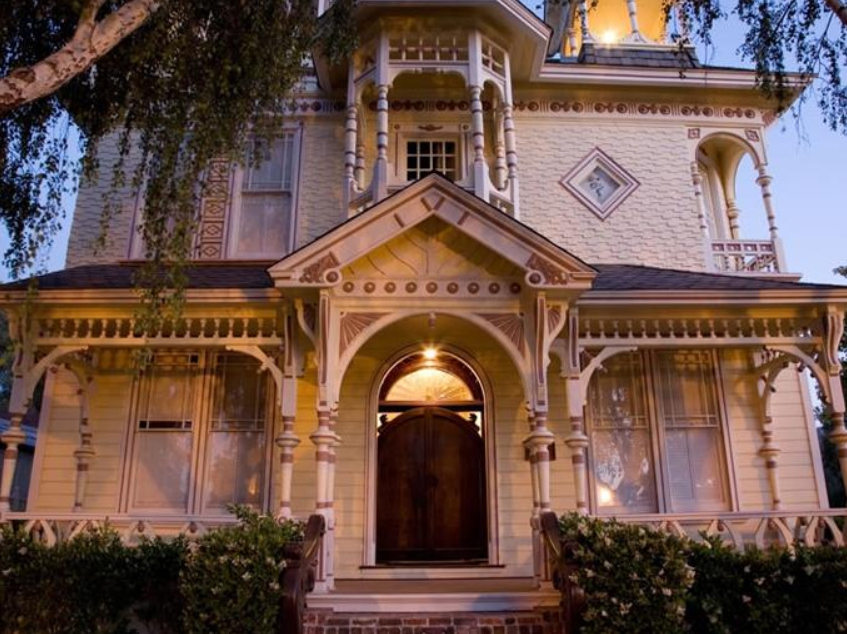 Fantasy-Themed Suites at The Victorian Mansion

The Victorian Mansion looks like the kind of place that should be haunted… or at the very least a movie set for a horror flick.  This grand Victorian stands behind a pair of weeping birch trees on the main street of a quiet Old West town in the Santa Ynez Valley.  The three-story mansion features high-peaked gables, fish-scale shingles, a turret, and ornately turned posts, balustrades, and scrollwork.  Most of the windows’ shutters and shades are drawn and no one is ever seen entering or leaving from the front door.  But the mansion’s exterior belies the secrets of the utterly whimsical bed and breakfast inside.

Not at all creepy, but a little bit kooky, The Victorian Mansion houses six over-the-top, luxury-themed suites designed to transport you to the fantasy of your choice.

In the 1950s Suite, you can sleep in the back of a 1956 Cadillac (complete with black-and-white checkered sheets and a pair of fuzzy dice dangling from the rear view mirror) while classic movies are projected overhead for the suite’s re-creation of a drive-in movie theater.  Hand-painted murals depict a panoramic of the drive-in with a snack shop, all lit with neon signs.  You’ll find a retro tabletop jukebox atop the suite’s Formica table and chairs and a pink bottle of Mr. Bubble sitting on the edge of the sunken black-tiled tub.

The Egyptian Suite whisks you on a magic carpet across the desert sands of the Sahara to a sheikh’s tent complete with a beautifully draped four-poster bed and an in-suite hot tub.  The gold-drenched suite is decorated with Persian rugs and murals of desert palms and caravans.  Behind a life-sized sarcophagus lies the entrance to a hidden bathroom, which features hand-painted tiles with Egyptian hieroglyphs and a mural befitting the tomb of an ancient pharaoh.

The other four rooms include the Roman Suite (where you can lounge in a chariot bed and climb marble steps up to a column-lined hot tub with views of Rome burning in the background), the Gypsy Suite (where you can sleep in a gypsy caravan and soak in a hot tub beside a campfire and a mural of a forested waterfall cascading into the tub), the Pirate’s Suite (which was built to resemble the hull of a ship and features sea lanterns that sway with the sound of waves), or the French Suite (which re-creates an artist’s loft overlooking Paris with a spiral staircase that leads to a romantic loft bedroom).

The bed and breakfast inn was the vision of its original owner, Dick Langdon, who commissioned a crew of over 200 craftsmen and artists over a period of 10 years to create the six themed suites in the 1980s.  Dick passed away in the late 1990s and another owner took over, but the mansion later fell into disrepair. Rod Rigole, a former guest who had always dreamed of owning a bed and breakfast like the Victorian Mansion, learned that the mansion was in foreclosure and purchased it in 2007.  He spent a year restoring the inn–including bringing back the original muralist Joyce Ortner to touch up the damaged murals–so that future guests could have the same experience that he and his family had enjoyed years before.

The mansion’s suites are not only immersive in their visual design, but also in the design of their sound, lighting, and fragrances.  While the rooms are the stuff of fantasy, it’s not at the expense of luxury. Each suite features impeccable attention to detail and premium mattresses, sheets, towels, and bathrobes.  A stay at the inn includes a hot breakfast delivered to the suite each morning via a dumb waiter.  Most guests check in to their fantasy hideaway and rarely ever leave the room.

The only thing missing from the suites’ immersive experience are the costumes.  But with Halloween just around the corner, guests could easily bring their own.