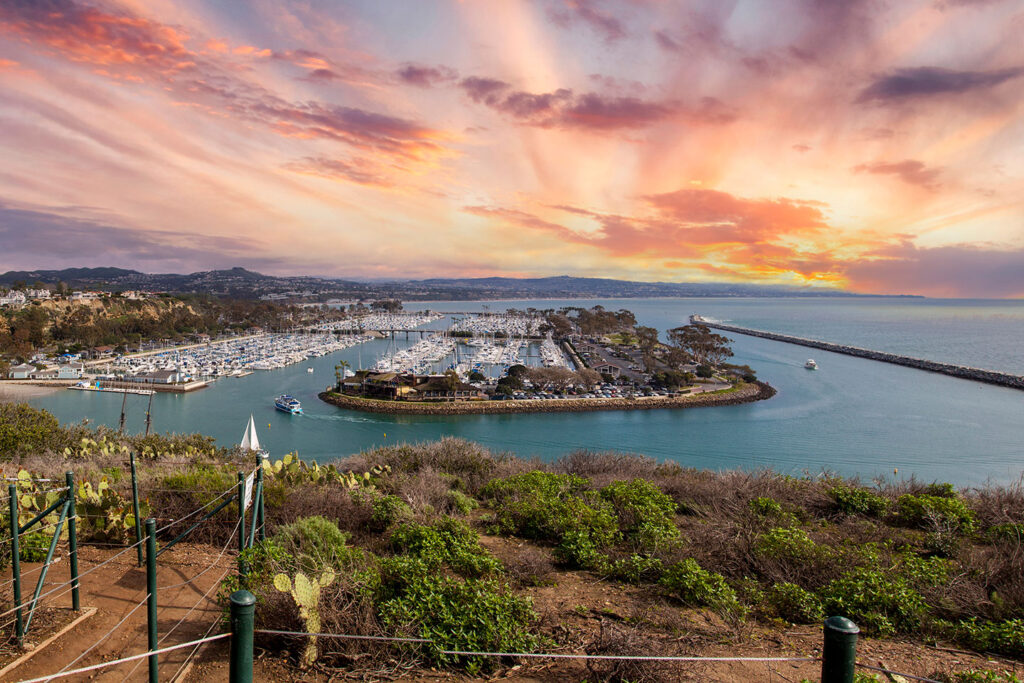 Nighttime had already fallen when I arrived at the Blue Lantern Inn in Dana Point. I checked into room 306 and opened the door to a private balcony overlooking Dana Point Harbor, the glittering lights of San Clemente across the water, and the star-filled skies above. I could hear the soothing trickling of a water fountain somewhere below and the faint barking of sea lions in the distance. The 29-room boutique hotel is just two blocks from Highway 1, but it was extraordinarily quiet. Arriving in Dana Point and the Blue Lantern Inn felt like entering a coastal oasis of calm amid the otherwise frenetic milieu of Southern California.

That night, I had a late dinner at Coastal Kitchen and then I wandered through the Lantern District and down Del Prado toward the harbor. Perched on prominent bluffs rising above the harbor, the Lantern District streets are each named for different colored lanterns that once lit the roads extending out to the bluffs. Fabulous restaurants and boutique shops line Del Prado, along with a charming parade of elephant sculptures all painted in unique fashion. Created by an array of artists and celebrities, the outdoor sculptures are designed to raise awareness of the plight of the Asian Elephant.

Back at the hotel, I drew a warm bath with lavender bath salts in the deep, jetted soaking tub. Afterward, I wrapped myself in a cozy robe and took out the lovely cheese platter and house-made cookies the innkeeper had greeted me with upon arrival. I had stashed the platter in the room’s small refrigerator along with a bottle of wine. I turned on the gas fireplace, poured a glass of wine, and sat by the fire to nibble on cheese, crackers, and cookies.

In the morning, I woke up ] just as the sun was starting to rise over the harbor.  Paddleboarders were already gliding through the glassy harbor waters. The idyllic Baby Beach sits directly below the Blue Lantern Inn in a calm, protected cove of the harbor and makes for an easy launch spot for kayaks and standup paddle boards. Visitors can rent kayaks and SUPs from Westwind Sailing or test their balance with on-the-water SUP yoga classes from iHeartYoga.

The protected cove is also home to the Ocean Institute, which offers educational programs, whale watching excursions aboard a research vessel, Sea Explorer, and tall ship sails aboard a replica of a 1770s privateer schooner, Spirit of Dana Point.  In the summer months, the Ocean Institute also offers nighttime bioluminescence cruises to catch sight of the beautiful glow-in-the-dark marine life.

I had booked a whale-watching tour for later in the day, but in the meantime, I set off for an early morning hike along the headland trails that stretch from the harbor to Dana Strands Beach. Trailheads for the Dana Point Headlands Conservation Area, which is one of the last unspoiled headlands in Southern California, are located just a few blocks from the Blue Lantern Inn. With stunning views, the coastal headlands are a great spot to watch for whales. Gray whales cruise the waters from November through April, while blue whales appear from May through November. On clear days, the ocean views extend as far as Catalina Island, 41 miles offshore. Other great nearby strolls for soaking up ocean and harbor views include the Dana Point Bluff Top Trail and the grassy Heritage Park.

After my hike, I circled back to the inn for breakfast. The complimentary breakfast for two features the chef’s choice of entrees along with coffee and tea, fresh juices, and a selection of cereals and breads, including bagels for toasting. On the morning of my stay, I was treated to a delicious breakfast burrito served with fresh fruit and a chocolate chip muffin. I also enjoyed yogurt with house-made granola. While the dining room is lovely with its breezy coastal décor, I opted to take my breakfast out to the patio overlooking the sparkling harbor and the vast blue ocean.

On the whale-watching tour, I came to appreciate why Dana Point is considered the dolphin and whale-watching capital of the world. On our trip, we spotted several giant blue whales, breaching humpbacks, and playful pods of dolphins while plying the gorgeous waters offshore. We also encountered an impressive sunfish known as Mola and saw countless seals and sea lions.

Back on shore in the afternoon, I wandered along the laid-back sands of Doheny State Beach where I watched surfers catching waves. Dana Point is steeped in surf history and culture. In 1954, Hobie Surf Shop opened its doors and moved the art of surfboard shaping from a backyard hobby to a bona fide business. Surf legends like Phil Edwards are immortalized in bronze across from the beach at Watermen’s Park Plaza. The town was also home to the original production office for Bruce Brown’s iconic surf film, The Endless Summer.

I spent the rest of the afternoon being lulled by the waves and endless views on a gloriously sunny day.