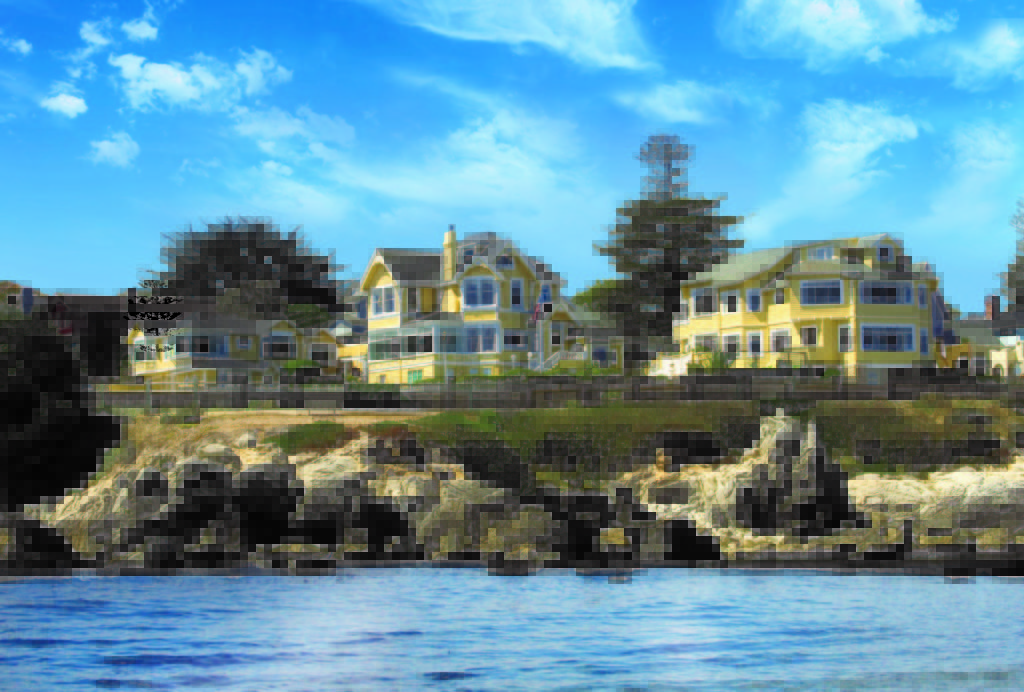 With most of us binge-watching Netflix due to California’s new stay-at-home orders, we thought it would be fun to highlight a handful of California inns that have served as locations for films and television shows.  Travel may be restricted for now, but thanks to endless streaming options, we can revisit inns in old movies and shows and wax nostalgic about a time before masks and social distancing.

The Victorian Inn in Ferndale has been featured in two major motion pictures: Outbreak starring Dustin Hoffman and The Majestic starring Jim Carrey.  The 1995 film Outbreak, which was about a deadly virus spreading through a California town, has unsurprisingly enjoyed a resurgence during this year’s pandemic.  It was one of the most popular films on Netflix last spring.  The film employed a number of local extras and shot many key scenes with the Victorian Inn as a backdrop. In one scene, Dustin Hoffman’s character runs out of the inn to steal a military helicopter on the street outside.  The film is currently available on Amazon Prime.

The Majestic, which was released in 2001, follows a 1950s blacklisted Hollywood writer who gets into a car accident, loses his memory, settles into a small town where he is mistaken for a long-lost World War II soldier, and rebuilds the town’s movie theater. The inn figures prominently as a backdrop in the scenes shot in downtown Ferndale. Current visitors will find the original artistic rendering of the Majestic Theatre that was built for the film and signed by all members of the cast hanging in the inn’s restaurant.  The film is available on Amazon Prime.

Across from UC Berkeley, the historic Bancroft Hotel  doubled as a fertility clinic in the comedy Junior, starring Arnold Schwarzenegger, Danny DeVito, and Emma Thompson.  In the movie, Schwarzenegger famously plays a scientist who becomes pregnant as a part of a fertility research project. The 1928 building had just been renovated to open as a hotel in 1993 when the crew filmed the scenes for the movie.

“There are some great shots of the front of the building,” say owner Daryl Ross. “The cast was very friendly, and the crew was great to work with. I distinctly remember Arnold and Emma joking around on the set. She didn’t like his cigars, and at one point he took a big puff and blew the smoke directly on her hair.”

Daryl said the crew was also helpful with finishing touches of the hotel’s renovation, including adding window blinds to all of the basement windows.  The movie was released in 1994 and is available on Amazon Prime.

The Double H Ranch B&B at Stonepine Estate in Carmel Valley also played host to the movie Junior. Many of the scenes of the retreat for expectant mothers (where Schwarzenegger hides out disguised as a woman during the final weeks of his pregnancy) were shot at the estate.

In addition to Junior, the estate also served as a location for two television series, Santa Barbara and Doris Day’s Best Friends.  Santa Barbara was a television soap opera that aired on NBC from 1984-1993.  The show chronicled the tumultuous lives of the wealthy Capwell family in Santa Barbara, California. One of the key scenes filmed at Stonepine Estate was the long-awaited wedding of two popular characters, Eden and Cruz.

Doris Day’s Best Friends was a cable talk show hosted by Doris Day featuring celebrity interviews and animal advocacy.  The show ran for two years, 1985-1986, and much of the filming for the show took place at the estate.

The Black Bear Lodge in South Lake Tahoe was featured in an episode of the Goop Lab with Gwyneth Paltrow. The “Cold Comfort” episode explores the question of whether a shock to the system can relieve stress. Shot in March of 2019, staffers learned “Iceman” Wim Hof’s breathing techniques, did “snowga” and leapt into a freezing Lake Tahoe. The lodge served as home base for the team as they explored breathing techniques to put the mantra of “mind over matter” to the test.

“While the crew arrived on a sunny winter week, the water temperature of Lake Tahoe was around 46 degrees Fahrenheit,” said owner Rachel Carlson. “It was fascinating to hover behind the scenes and watch Wim do these breathing exercises with the group.”

The episode of Goop Lab featuring Black Bear Lodge aired in September 2020 and is available on Netflix.

The oceanfront Seven Gables Inn in Pacific Grove was the centerpiece of a Visa commercial that originally aired on Super Bowl Sunday in 1995. The original commercial also featured Big Sur’s Rocky Point Restaurant and the Molera Trail Rides, but was eventually shortened to just feature the inn. The commercial ran for two consecutive years. The most dramatic shot showcased the inn’s Breakers Room with its stunning views of the Monterey Bay. When Visa filmed the commercial, the inn only had 14 rooms. They’ve since added additional buildings for a total of 25 rooms, all with ocean views.

More recently, the inn has been featured backdrop for two seasons of the HBO series, Big Little Lies.  Set in a quaint California beach town, the hit series about murder and deception stars Reese Witherspoon, Nicole Kidman, and Shailene Woodley. Guests of the inn have been treated to watching the production process while enjoying the inn’s wine and cheese reception overlooking Lover’s Point Park and the Monterey Bay.  The series is available on HBO Max and Amazon Prime.