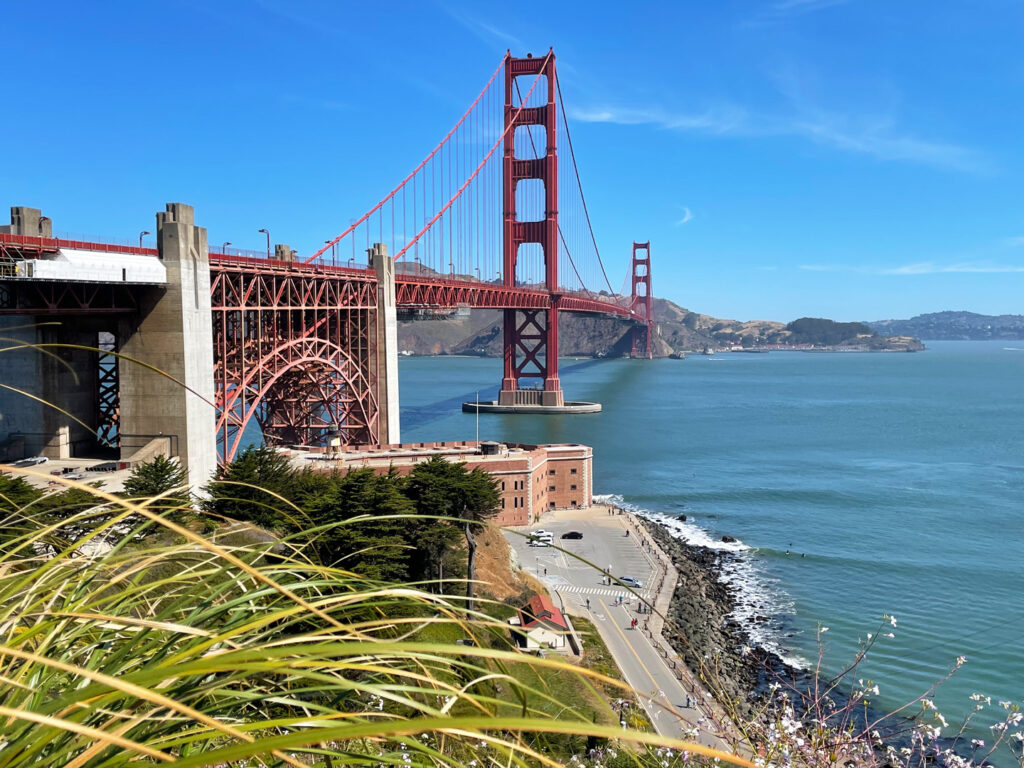 Best Historic and Outdoor Attractions at the Presidio in San Francisco

One of the most stirring vistas of San Francisco’s Golden Gate Bridge is from a little-known overlook at the top of the Presidio’s National Cemetery. A short trail winds through a eucalyptus forest and past low stone walls. The heavy stone slabs are inscribed with excerpts from The Young Dead Soldiers by American poet and World War I artillery officer Archibald MacLeish. Just beyond the stone walls, the forest opens to a viewpoint overlooking rolling green hills lined with thousands of white headstones. 30,000 American soldiers and their family members are buried here, including Civil War generals, Medal of Honor recipients, Buffalo Soldiers, and a Union spy. Golden Gate Bridge and the waters of San Francisco Bay glisten in the distance.

The Presidio was home to Ramaytush Ohlone peoples for thousands of years before generations of soldiers serving under three flags passed through these hallowed grounds. As Thomas Jefferson was drafting the Declaration of Independence in 1776, Juan Bautista de Anza established El Presidio as Spain’s northernmost colonial outpost in the Americas. Mexico assumed control of the Presidio in 1822 after Mexico declared its independence from Spain. U.S. forces occupied the Presidio’s adobes during the Mexican American War in 1846 and would later build the Presidio into the country’s premier West Coast Army post. Before its conversion to a national park in 1994, the Presidio was the oldest continuously operating military base in the U.S.

The 1,491-acre urban park is now managed by the Presidio Trust in partnership with the National Park Service and the Golden Gate National Parks Conservancy.  The park offers a vast array of cultural and recreational activities to connect visitors with the Presidio’s rich history, diverse wildlife habitats, and beautiful landscapes.

Over half of the Presidio’s 870 buildings are the National Registry of Historic Places and more than two-thirds of the historic buildings have been fully or partially rehabilitated for public use. One of the oldest is the Presidio Officers’ Club, which features adobe buildings dating back to the Spanish reign. The club served as an exclusive gathering spot for Army brass and their families throughout the 20th century. It now houses free exhibitions tracing the history of the Presidio. The Presidio Officer’s Club is open on Saturdays from 11 a.m. to 4 p.m.

Beneath the southern end of Golden Gate Bridge, Fort Point National Historic Site is a massive brick and mortar fort featuring three tiers of arched brick casemates for cannons and seven-foot thick walls. The U.S. Army built the fort at the mouth of San Francisco Bay in 1853 to protect the bay from foreign attack during the height of the Gold Rush. It continued to serve in defense of the bay through World War II. Fort Point offers living history demonstrations, guided tours, and unique vantage points of the Golden Gate Bridge. Admission is free; check the National Park Service website for hours.

Inside one of the former U.S. Army barracks lining the Main Parade Lawn, the Walt Disney Family Museum illustrates the fascinating life and achievements of the man who raised animation to an artform, transformed the entertainment industry, and whose legacy continues to influence and inspire. Interactive gallery highlights include feature Walt’s early drawings and animation (including the first-known sketch of his famous mouse), movies, music, state-of-the-art technologies, listening stations, more than 200 video screens, a 14-foot model of Disneyland, and more. A current special exhibition traces Walt Disney Studios’ little-known contributions to the World War II effort. Advance tickets for admission are available online.

One of the most poignant landmarks at the Presidio is the World War II Memorial to the Missing. A gently curving wall of granite overlooks the Pacific Ocean and bears the names of 412 servicemen and women who were lost or buried at sea in the waters of the Pacific between 1941 and 1945. Another memorial, the Korean War Memorial, opened in 2016 to honor the tens of thousands of Americans and one million Koreans who lost their lives on both sides of the war.

In addition to the many historic buildings and attractions, the Presidio Trust also manages 30 archaeological areas that date from Native Ohlone settlements through the 20th century. Excavation around the original Spanish fort has revealed artifacts dating to the Spanish, Mexican, and American occupations of the area. Archeologists share insights on their finds with visitors on Fridays and Saturdays from 10 a.m. to 2 p.m., April through October.  The Presidio will also host an International Archaeology Day event on October 16, 2021.

Ironically, the military’s presence at the Presidio precluded the kind of dense development found everywhere else in San Francisco and helped to preserve the Presidio’s diverse natural resources. The park includes nearly 1,000 acres of open space with 24 miles of hiking and biking trails, eight scenic overlooks, beaches, forests, marshes, and an 18-hole golf course.

The original Presidio Golf Course was built exclusively for Army officers and members of the private Presidio Golf Club in 1895. One of the oldest courses on the West Coast, it attracted the likes of Theodore Roosevelt, Charles Schulz, Joe DiMaggio, and Arnold Palmer. Today, the challenging 18-hole course is open to everyone to enjoy its steep, forest-covered hills and tight fairways.

The Presidio’s network of hiking and biking trails allows visitors to piece together loop rides and hikes of varying distances and difficulties that connect nearly all of the park’s attractions. The Batteries to Bluff Trail on the Presidio’s western shoreline offers dramatic vistas of Golden Gate Bridge and the Marin headlands from historic gun batteries and coastal bluffs with an optional side trip to tranquil Marshall Beach. The Golden Gate Promenade runs along San Francisco Bay from the Marina District to Golden Gate Bridge with stunning views, sandy beaches, and a reclaimed tidal wetland at Crissy Field that is ideal for birdwatching. The mile-long Ecology Trail climbs through forests and grasslands to Inspiration Point Overlook, which offers stunning views of Alcatraz and the bay. A short connecting trail leads to El Polín Spring, which feeds the Presidio’s largest watershed and is a wonderful spot to picnic amid the birds and butterflies.  A full trail map is available for download.

In addition to outdoor recreation pursuits, outdoor cultural treasures also abound at the Presidio. The park is home to the largest collection of British artist Andy Goldsworthy’s public works in North America. Inspired by the Presidio’s interplay of the built environment and open spaces, Goldsworthy created four installations in the park between 2008 and 2014. Spire, Wood Line, Tree Fall (temporarily closed), and Earth Wall can be visited individually or explored together via a three-mile hike.

Through next year, the Presidio is hosting an outdoor photo show, My Park Moment. The free show features over 400 inspiring, large-scale photos of people from all walks of life enjoying parks from around the world. The photos are displayed on shipping containers in four Presidio locations, all within an easy stroll of each other.

One of the photo show locations is near the future site of the Presidio Tunnel Tops. The new 14-acre section of the park is being built atop the Presidio Parkway tunnels, which rerouted a former above-ground highway into tunnels below. Set to open in the spring of 2022, the Tunnel Tops will connect the Presidio’s historic Main Post with Crissy Field and the shoreline. The new section of the park will feature trails, scenic overlooks, picnic sites, and an interactive play space for children.

Two upscale boutique hotels located inside the Presidio rival the national park as destinations unto themselves. The Inn at the Presidio and the Lodge at the Presidio were former officer quarters and barracks, respectively, that were reimagined and elegantly redesigned with deep reverence for the buildings’ military heritage. The design team, led by Laura Cook of LC Interiors (formally of BraytonHughes Design Studios), sought to evoke a bygone era of military life “at ease” while providing the highest levels of modern comfort for guests.

Inn at the Presidio

The Inn at the Presidio exudes the understated luxury and comfort once reserved for Army officers. The boutique hotel is housed inside of a historic, Georgian-Revival brick building that formerly served as the Bachelor Officer’s Quarters. The hotel is tucked in a tranquil corner of the Main Post backed by a eucalyptus forest. The hotel features 22 spacious accommodations, including 17 suites with gas fireplaces.

The rooms are handsomely appointed with modern design choices that evoke vintage military colors and materials. The leather chairs and sofas are trimmed with brass tacks. Wood desks and dressers feature black metal accents. Unique, black-framed mirrors resemble the shape of Army patches while the striped throw pillows and other linens were inspired by military stripes. The deep, dark hues of the bathroom tiles conjure the colors of military dress uniforms.

The rooms feature luxuriously comfortable beds with fine linens, generously stocked honor bars, cozy robes, and many other creature comforts. Stays include a complimentary breakfast and evening wine and cheese reception. The hotel features broad porches lined with rocking chairs, an outdoor firepit, and welcoming common spaces decorated with vintage military memorabilia. The trailhead for the Ecology Trail is directly behind the hotel and winds through forests and grasslands to a viewpoint overlooking the bay.

Lodge at the Presidio

Located in the heart of the Presidio’s Main Post, the Lodge at the Presidio is San Francisco’s closest hotel to the Golden Gate Bridge. The 42-room, three-story hotel is housed inside former U.S. Army barracks that were built between 1895 and 1897 and beautifully renovated into a boutique hotel in 2018. The original mess hall is now an elegant dining room serving complimentary breakfast and evening wine and cheese receptions. Rocking chairs on the front porch overlook the Main Parade Lawn while the outdoor fire pit behind the hotel offers stunning views of the Golden Gate Bridge.

As with the Inn, the Lodge at the Presidio salutes the building’s military heritage, but with a decidedly modern aesthetic. The lobby elevator features aged pewter with brass strapping to create the look of a metal ammunition box. The lobby’s front desk was designed with three brass “sergeant” stripes and red accents. The blue accent walls display a mix of historic photos and other artwork related to the Presidio.

In the guestrooms, striped wool blankets line the foot of the beds while bullet-shaped brass lamps adorn the desks. The rooms all feature luxurious beds, well-stocked minibars, smart televisions, and other cozy amenities. Many of the guestrooms also offer incredible views of the San Francisco Bay, the city skyline, the Golden Gate Bridge, or a combination thereof.